The Alexis Board of Education endorsed the ﻿development and implementation of the Alexis Heritage Institute. The institute will serve the people of Alexis as a resource for language, culture and preservation of their history. 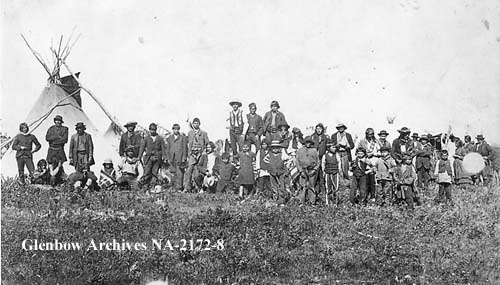 Historically, the Alexis people have come to be known by a variety of different names. Early records tend to use the term Assiniboine, which derived from the Cree word Assinipwat, meaning the Stone People. The respective English term is Stoney. The Alexis people now use the name Alexis Nakota Sioux Nation. The choice of this name refers to the dialect spoken at Alexis, which is part of the Siouan languages. According to Parks and DeMallie (1992), distortion of earlier linguistic research on the Siouan languages led to a simplified classification of the dialects into d, l, and n language groups, known as Dakota, Lakota, and Nakota. Under this classification, Alexis' dialect is classified as Nakota. The Alexis people, however, refer to themselves and their language as Isga. This is the term that is used in the Stoney Language Curriculum.

The Alexis Nakota Sioux Nation is the most northern representative of the Siouan language family. At this point in time it is unclear when the Alexis people arrived in west-central Alberta. When Anthony Henday (also known as Hendry) traveled through southern and central Alberta, he encountered many Assiniboine bands on his way (Burpee 1973), which indicates that Siouan speaking bands were well established in the region. Alexis' oral history includes migration stories through south-eastern Alberta and Saskatchewan. Laurie's (1957-59) archival and oral history research confirms the Saskatchewan connection for the Nakota Nations of Morley. Overlapping accounts with the Nakota Nations of Fort Bellknap and Fort Peck in Montana might confirm the migration route to the south.

Alexis' traditional hunting territory reaches from the Drayton Valley area in the south along the foothills and Rocky Mountains towards Whitecourt and the Swan Hills in the north, and reaches east as far as Barrhead. In historical documents (e.g., Alexander Henry the Younger's 1811 account in Coues 1897) this area between the Athabasca, Pembina, and North Saskatchewan Rivers has been described as the hunting territory of the Swamp Ground Stoney. Early explorers observed that unlike their close relatives, the Strong Woods Stoney (the Bears paw and Chinked bands of Morley and the ill-fated Sharp head Band), the Swampy Ground Stoney did not readily adopt the horse and buffalo culture of the plains but remained in the lake abundant forests to fish and to hunt moose, elk and beaver (Andersen 1968, Dempsey 1997).

In 1877, Chief Arannazhi signed the adhesion to Treaty Six on behalf of the Stoneys of the Pembina and Athabasca River region. He became known as Chief Alexis, and the reserve at Lac Ste. Anne, where the Stoneys settled, became known as the Alexis Reserve.

According to Alexis' oral history, centuries ago a Stoney Chief led his people to the shores of Wakamne (God's Lake - Lac Ste Anne) as a result of a vision. Taking reserves at the shores of the sacred lake subsequently was a logical choice. Over centuries, the sacred lake (known as Manito Sakahikan in Cree - Spirit Lake) was a gathering place for different First Nations. En Route from Edmonton to the Rocky Mountains, a trading post with a large Métis community developed on its southern shores during the fur trade. This post was also regularly visited by Stoney hunters and trappers. In 1843, a catholic mission was established at the traditional gathering place, and missionary Father Thibault renamed Wakamne Lac Ste. Anne (Simon 1995). In the years to follow, most of the Alexis residents converted to Catholicism. Despite of having taken reserve, Alexis' families maintained their strong ties to their hunting territories by spending the trapping season on the land. Many of their children, however, were sent to residential schools. Today, Alexis' children remain on reserve for their education. Many families practice traditional activities such as berry pickinfall campouts. Alexis cultural uniqueness is celebrated in the rich oral traditions present in this community.

In the year 2005, the Alexis Board of Education conducted a survey to record the number of Stoney fluent speaking members. This research validated that the Stoney Language will become a Ceremonial Language within 20 years and will be extinct in less than 50 years. This hypothesis was determined by measuring the time of death of the youngest fluent Stoney speaking member in Alexis, which was 35. If this member lives for another 50 years, and no one after him is able to speak fluent Stoney, the Stoney Language will end with him. This information concerns the people of Alexis as they understand that if they lose their language, they will also lose their culture and identity.

According to The Hans Rausing Endangered Languages Project, 2006, "Responses to losing the language include local language maintenance and revival programs and language documentation". Alexis Education has spent the last two decades researching and documenting their language.

In 2009, Alexis Board of Education conducted a school evaluation and exposed a high response and interest of the language program by the parents and students. One of the recommendations to the Board from the group of researchers was to ensure that the language is copyright protected.

The nation would be responsible for developing a process to protect their information and stories and knowledge from outside influence and usage.

Alexis Nakota Sioux Nation's effort to retain their language is impressive. The young people at Alexis school have been learning to read and write in Stoney; however, not all students (living in Alexis) attend Alexis School and not enough people are using the writing system within the community. This must change. To avoid the threat of extinction, Alexis must create awareness, expand its operations and develop additional resources to empower Alexis Members, specifically youth, to continue communicating, speaking and writing in Stoney. This can be done but it will take some time, energy and resources to accomplish.

Alberta Education approves the Stoney Language curriculum, but does not fund it. Indian Affairs also provides funding to the school; however, it is formula driven and is not adequate enough to meet the growing needs of the people and to expand the Stoney language program into the community and develop more resources for senior high level and university level courses. The Heritage Institute encompasses this vision for the people of the Alexis Nakota Sioux Nation community.

Sources: Alexis Board of Education
Written by: Stephanie Alexis, Researcher - 2012